Crumpled City Maps are the lightest maps in the world: indestructible, soft and waterproof, they can be crumpled, squashed and crushed into a ball. What’s more, the more battered they are, the better they look.

A contemporary reinvention of the most basic travel tool:
– they are easy to use, more fun and inspire more freedom than traditional maps;
– they have a completely new look, from the street mappings to the colour scheme and include fresh and fun new city icons;
– they provide details about a large part of the city, including streets, monuments, museums, art galleries and much more

The Crumpled City Map is the lightest map in the world. Each Crumpled City map weighs less than one ounce and is 100% waterproof, soft, thin and compact – it It crumples down into a ball that fits in your palm. Stuff it in your pocket, or use the included drawstring pouch, and you’re ready to get back on the road.

Designed by Emanuele Pizzolorusso , a young Helsinki based industrial designer, the Crumpled City Map is made to be crushed and manhandled. The maps are printed on a special durable, flash-spun hi-density polyethylene fibrous material that makes them the lightest and most rip-resistant maps on market, as well as 100% waterproof, and 100% recyclable.

Unlike traditional paper maps which can be awkward to deal with, the Crumpled City Map can be easily crammed into your pocket, backpack or the carrying pouch provided, without having to worry about refolding it along the original creases, or spoiling your map.

Each map is generally divided into three sections: The first section is a small directory of tourist places of interest. Below that is a small section called Soulsights that denotes neighbourhoods of interest. Each neighbourhood features a short description and points out significant highlights within each area. The third section is the actual map itself.

The Crumpled City Map can be improved: For example, you can’t do a search of the streets or landmarks like you can do on Google Maps. While there is enough detail on the map covering the semi-major and main streets, not every street and alleyway is featured. Surely, it could use the blank side backside more? These Crumpled City Maps could add more colours like the Crumpled City Junior Maps. Also, unlike traditional maps, it is harder to mark local attractions and other points of interest with a pen. Still, it all comes down to personal preferences and needs.

The Crumpled City Map makes a great gift for anyone headed to a major city for a short visit. Whether you’re an urban nomad backpacking through Europe or a conservative businessman mapping out an unfamiliar city, the Crumpled City Map is the perfect accessory for your travels. There’s enough a mix of touristy and insider that even someone with a fair knowledge of the city could find something new to do. It is easy to read, has a contemporary design and provides details about a large part of the city, including streets, monuments, museums, art galleries and much more. It’s convenient, compact, and unlike the GPS on your phone, never needs a charge to tell you where you are.

From a design perspective, it’s also a beautifully designed product that is also worth showcasing on your walls and a worthwhile keepsake for future use or as a souvenir.

The map series is manufactured by an Italian company called Palomar but it’s possible to obtain them through Amazon. Prices will range from $8-14 depending on which city you choose and there are a fair number of retailers that offer at least one out of the 40 different cities in the series.

I would advise that you look for your desired map on Amazon first, before getting them from Palomar where the prices seem to be higher (perhaps due to the Euro.

Alternatives:
Crumpled City Junior Maps come with ingenious illustrations making them easy to look up as well as captivating to the eyes of the youngsters. Rich in information, each map features several not-to-be-missed Junior spots. Such “unmissable” top places were selected thanks to the help of “special on location correspondents” who have turned these maps into up-to-date tools that make travelling come alive. A map carefully thought out for kids and their families. 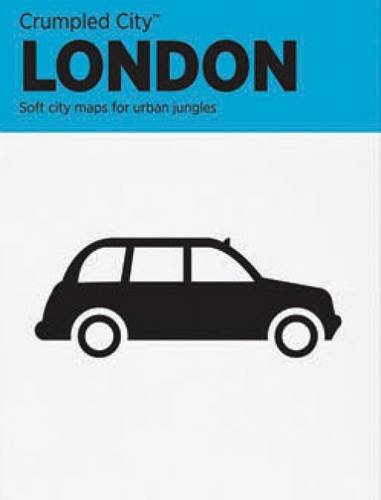 Be the first to review “Crumpled City Map” Cancel reply